It just keeps getting longer, doesn’t it?

During a YouTube safari in search of Icarus Montgolfier Wright, the 1962 short film based on Ray Bradbury’s poem of the same name, I found that another Bradbury piece, the post-apocalyptic vignette “There Will Come Soft Rains” from The Martian Chronicles, is a big favorite with animators.

For my money, the most striking is this 1984 production from Uzbekfilm:

In addition to being a pretty decent visualization, that Uzbekfilm production offers what you might call a paranoia palimpsest.

Bradbury’s story was written in the late Forties, when the Cold War’s chill was settling in and the postwar dread of nuclear war was in full noxious flower. A wave of novels and films about the aftermath of nuclear war was building: Arch Oboler’s Five would be released in 1951, a year after The Martian Chronicles was published, to be followed by (among many others) Pat Frank’s Alas, Babylon, Neville Shute’s On the Beach, Walter Miller’s A Canticle for Leibowitz, the 1951 nuclear warning film The Day the Earth Stood Still, the original Godzilla, and innumerable B-movies in which attractive actors and actresses would contend with rubber-suited mutants spawned by radiation.

Leave it to Ray Bradbury to find a unique angle on the post-apocalyptic theme, one that combines a lampoon of Fifties consumerism (the robot kitchen that wakes everyone up, feeds them and gets them out the door) with the gradually dawning realization that all human life has been wiped out. Bradbury characteristically links it all to poetry — in this case, Sara Teasdale’s 1920 work of the same name:

There will come soft rains and the smell of the ground,
And swallows circling with their shimmering sound;

And frogs in the pool singing at night,
And wild plum trees in tremulous white;

Robins will wear their feathery fire,
Whistling their whims on a low fence-wire;

And not one will know of the war, not one
Will care at last when it is done.

Not one would mind, neither bird nor tree,
If mankind perished utterly;

And Spring herself when she woke at dawn
Would scarcely know that we were gone.

“Would scarcely know that we were gone.” A perfect line for a story in which humanity is defined by its self-inflicted absence.

Flash forward to the early Eighties. Ronald Reagan is openly joking about nuking the Soviet Union, fantasies of space-based defense against missiles are floating in the air, and members of Reagan’s administration are offering daffy scenarios about how to survive nuclear devastation. In response, Jonathan Schell’s 1982 essay The Fate of the Earth essentially starts the nuclear freeze movement, and the television film The Day After counters Reagan’s happy talk with a gut-wrenching depiction of how a nuclear war would look from the civilian perspective.

Where Teasdale’s poem (and Bradbury’s Fifties era use of it) imagined mankind disappearing without causing much of a fuss, the Uzbekfilm production imagines much harsher consequences in keeping with its release in 1984 from the pre-perestroika Soviet Union. There’s even a glimpse of nuclear winter, a term Carl Sagan and others used as often as possible, though there is still some debate about such an effect. But the fears of the Fifties overlap with the fears of the Eighties quite comfortably.

Along with the Soviet film, I came across this undated student production, which compresses the story considerably but still gets the point across :

And this 2006 live-action production from Chris Rowe:

And I don’t want to leave out this short film based on “The Pedestrian,” which Bradbury wrote after being accosted by police while taking an evening stroll:

Meanwhile, I have yet to find Icarus Montgolfier Wright. Anybody know where I can score a copy?

Podcast junkies who are also blues buffs should have The Blues File wired into their iTunes, or whatever. These short and to-the-point podcasts pack an impressive amount of information into a brief span of time, and the choice of subjects is a nice blend of the familiar and the esoteric. The most recent podcast is about as esoteric as it gets: Eddie “One String” Jones and Edward Hazelton, Los Angeles street musicians who caught the attention of a wealthy benefactor named Frederick Usher in the early Sixties. Usher sponsored the release of One-String Blues, a collection blending Hazelton’s solo harmonica with Jones’s performances on a handmade one-strong instrument similar to an African diddley bow. The album also includes a great deal of chatter that contrasts Jones’ determinedly sunny outlook with Hazelton’s notably darker temperament. I can’t say it’s something I’d want to play very often, but if you’re interested in the roots of the music this is probably as raw and as close to the original country blues as you’re likely to find. I couldn’t find any clips of Jones or Hazelton, but this video of Bill Abel performing a Muddy Waters song on his own homemade diddley bow will give you the idea.

It’s been years since I’ve seen a good champagne sunset, and yesterday’s was a great one. You need a recent downpour, a thick cloud cover overhead and a clear horizon, so the rays of the setting sun reflect off the bottoms of the clouds and fill the air with a diffuse pink light. From about 8:30 p.m. to 8:45 p.m., that’s exactly what we had here in Central New Jersey. Breathtaking.

Back when his friend J.R.R. Tolkien was grumping about the way people were reading all kinds of allegorical meanings into The Lord of the Rings, C.S. Lewis offered both sides a way out by drawing the distinction between allegory, which presumes to read an author’s intentions, and applicability, which is what the reader himself brings to his reading of an author’s work.

I wonder what Lewis– or, for that matter, Tolkien — would have had to say about the way the Iranian government is trying to keep people off the streets by broadcasting, among other things, a marathon of Peter Jackson’s Lord of the Rings films, or the way people are subverting the government’s intentions by reading all kinds of unflattering meanings into the characters and situations. 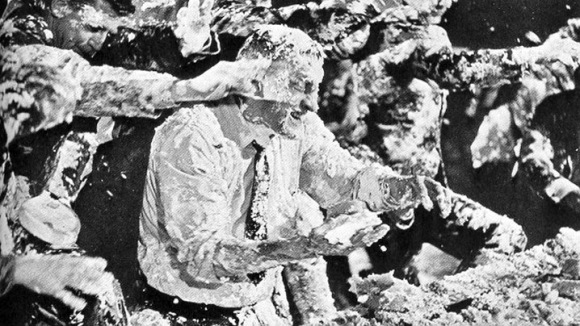 Everybody knows that the 1964 Stanley Kubrick film Dr. Strangelove, or: How I Learned to Stop Worrying and Love the Bomb was supposed to end with an enormous pie-throwing fight in the War Room. Here’s why it was changed, and how the original ending played, as described by the film’s editor, Anthony Harvey.

Who’s the poet laureate for your state?

This is the year for John (and Dan) Fante. Is America ready?

The Online Museum of Wingnuttia, aka The Big Pail O’Fail. What an awful time for our country.

Hoo boy, now that is an embarrassing moment.

Thomas Frank, author of What’s the Matter With Kansas? and The Wrecking Crew, is reviving The Baffler, the business and culture magazine he founded in 1988. Commodify Your Dissent, a collection that showcases the magazine’s most provocative articles, will give you an idea of what’s to come.

“Especially with these valve amplifiers that we really love, it gets to the point where they suddenly start really working, and the valves start to really glow and glow, and they might even explode. That’s when it’s starting to get good.”

Poppies grown in Australia account for roughly half of the legally produced opium in the world. Who knew? And wallabies are eating the poppies and creating crop circles as they wander in a narcotic haze. No wonder they call the place Oz.

“Some of the things Bill told me on the tapes I have never repeated, except to my wife. One thing I can partly tell now that he is dead. When he entered the CIA, in 1951, he beat the polygraph test that all prospective agents have to take. (Always willing to risk.) He was determined to protect a family member from an embarrassing disclosure, and he did. I asked him how he accomplished that. ‘I guess that if you think you have a right to tell a lie, it will not register as one.’ At least it did not with him.”

Either some editor at the Washington Times has a truly awesome poker face, or this is the most unintentionally hilarious news paragraph I’ve ever seen:

Extramarital affairs, gambling, alcohol abuse, prostitution and sexual pursuit of minors have taken a toll on the GOP.

On a related note, I have to say that while Mark “The Luv Guv” Sanford has been pretty useless as a wingnutty Republican, his unintentional contribution to the English vernacular merits the highest praise. By helping make “Hiking the Appalachian Trail” the instant preferred euphemism for adultery, Sanford may even have trimmed a few thousand years off his time in Purgatory.

The professionals who talk shop on the Writing Excuses podcast skew toward the fantasy end of the spectrum, but the shrewdness of their advice goes well beyond the bounds of genre. This session on “How Not to End Your Book” is a case in point. I particularly liked the idea that the promises a writer makes (sometimes inadvertantly) in the course of a story have to be satisfied by the ending. And this talk about the difference between satire and lampooning will lead any writer’s mind in some useful directions.

Miss Snark, the Literary Agent is no longer blogging, though presumably she is still snarking — and agenting. But her site is still live, and the advice is still good.

You remember the scene in Glengarry Glen Ross where Alec Baldwin explains the elements of salesmanship — attention, interest, decision, action? Okay, so imagine Baldwin’s voice as we go through the building blocks that add up to a fully realized scene.

Don’t sweat the petty things and don’t pet the sweaty things. And ten times never get stressed about writing a synopsis. Especially because it might, you know, actually help sell your freakin’ manuscript and get your literary career rolling. Just a thought.

Time flies right along, but writing, marketing, selling and publishing a novel sure doesn’t. Let the man explain exactly why this is so. 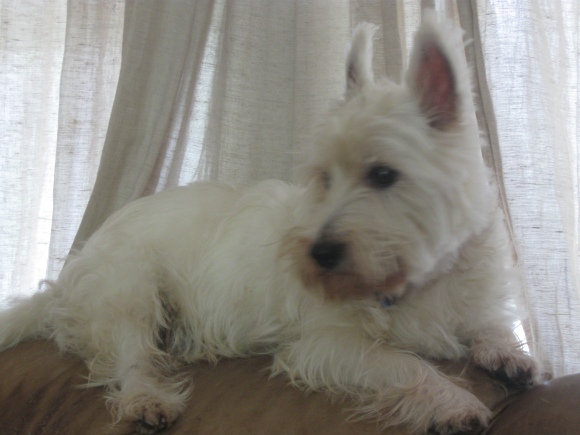 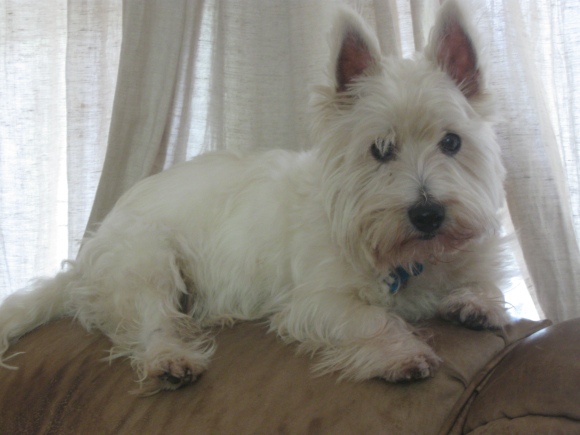 My appreciation for Kurt Vonnegut’s writing is pretty much confined to his essays and his earlier novels, but this AbeBooks showcase of signed and collectible Vonnegut works has a very intriguing item indeed: a pair of draft screenplays for George Roy Hill’s 1972 film version of Slaughterhouse-Five, along with a letter from the MPAA ratings board listing changes required to bring the film in with an “R” rating instead of the dreaded “X.” It’s pretty funny to think of any version of Slaughterhouse-Five getting hit with an “X” or an “NC-17” or any other kind of five-alarm rating nowadays, but remember that only a couple of years earlier Midnight Cowboy had gone out with an “X,” and Stanley Kubrick had been forced to recut A Clockwork Orange to get its initial “X” rating reduced. So the world had to be kept safe from the sight of Valerie Perrine’s boobs.

I’m not interested enough to park nearly four grand in the seller’s bank account, but I would like to see some of the changes made during the film’s development. Not only is the Hill-Geller version of Slaughterhouse-Five greatly superior to the novel (a fact Vonnegut himself acknowledged), but it’s also a model of how to adapt a dodgy prose work for the silver screen. Everything in the film is perfect — I wouldn’t change a single frame.

Hill tends to get overlooked by film buffs because, like Carol Reed, he adapted his style to the material at hand, rather than the other way around. And the man was a class act. With the bucks from Butch Cassidy and the Sundance Kid still rolling in, Hill used his box-office cred to make a demanding art-house film with an unpopular philosophical outlook, no big-name stars, and a deliberately subdued and colorless lead performance. I watched it again a few months ago and it holds up quite nicely — certainly much better than “Raindrops Keep Falling On My Head.”