* Contrary to what you’ve been hearing all these years, cockroaches will not be the only things left after a worldwide nuclear war. There will also be Annapurna stacks of books by Janet Evanovich, John Grisham, James Patterson, and Dean Koontz. In fact, they will outlast even the cockroaches. This is not an aspersion on their personal and/or literary qualities. I chatted with Janet Evanovich back when she was launching the Stephanie Plum series, and a nicer person you couldn’t have asked to meet. I liked the Grisham books I’ve read, and I thought it was pretty cool of him to sink all that money into resuscitating the Oxford American. But their books pour into this used bookstore and don’t leave.

* A separate Rapture will be needed to remove all the copies of the Left Behind series that are glutting garage sales and used bookstores.

From the Izu Islands of Japan (where volcanic activity fills the air with the stench of sulfur) to saltie-infested Ramree Island in Burma (where it is believed hundreds of soldiers met horrible deaths during World War II), here’s an irresistible list of the top 10 places you don’t want to visit. Though I’m perfectly happy to keep clear of the North Yungas Road, which kills a few hundred travelers annually, and the Ilha de Queimada Grande, which is densely populated by a uniquely dangerous breed of pit viper, I have to admit the “Door to Hell” in Turkmenistan has a certain fascination. And I wonder if the Alnwick Poison Garden (pictured above) inspired Dr. Shatterhand’s garden in the Ian Fleming novel You Only Live Twice.

For decades now, E.O. Wilson has been your go-to guy on the subject of ants. Now he’s published his first novel. Want to take a wild guess on what it’s about?

Would you really want to live in any of these popular science fictional universes?

So you wanna be a literary star? Just follow this chart.

Pat on the back

Belying his Web identity as a crotchety old fan, Steve Davidson has written some very nice things about me and my current business venture. Please amplify my thanks by giving him some clicks.

This list of Ten Influential Books at Crooked Timber, and the response it generated from commenters, is doubly interesting for the number of mentions given to The Bell Curve, that classic of pseudoscience excreted by Charles Murray and Richard Herrnstein in 1994.

The book is relevant because it is still embraced by many conservatives (Andrew Sullivan, who long ago came to his senses about the invasion of Iraq, continues to pat himself on the back for devoting many pages of The New Republic to the book’s quackery), and its bad-faith methodology has plenty of parallels among creationists and climate-change denialists. I was particularly taken with this comment:

I was a sophomore in college when it came out, and had just declared my major in “behavioral science,” i.e. psychology, sociology and anthropology. As a result that semester I was taking intro to psych, intro to soc, intro to cultural anth and intro to physical anth. When the book came out, all four professors dropped everything on their syllabi to devote our full attention to demolishing it premise by premise. So many of my first serious lessons about science, both the proper doing thereof and the easy distortion thereof, came in the context of that book.

I think a similar opportunity is presented by the Texas Board of Education’s recent curriculum change, part of the ongoing wingnut crusade to design an alternative universe in which Thomas Sowell, Glenn Beck, and Newt Gingrich are the brightest intellectual lights. The decision to replace “capitalism” — a concise and perfectly accurate term for our economic system — with the flummery of “free-enterprise society,” for example, is a gold mine for anyone teaching students about jargon, propaganda, Orwellian Newspeak, or basic English.

Teachers within Texas — and, for that matter, parents who don’t want their children swindled out of an education — have every reason for curse the state school board. But the rest of us have been presented with a teachable moment.

The new Drive-by Truckers opus, The Big To-Do, manages the feat of outdoing its predecessor, Brighter Than Creation’s Dark. The trademark sound — dark, gritty rock shot through with country twang — is even more potent for the absence of filler: no borderline offensive goofs like “Bob,” just thirteen powerful songs about trying (and often failing) to keep body and soul together in the Post-Dubya Age of Suck. It’s Lynyrd Skynyrd with more brains, Crazy Horse with more inspiration, Nebraska with more drive. It’s a formula, but it’s not formulaic. I don’t listen to enough new music these days to feel comfortable making pronouncements like “The DBTs are the best American rock and roll band now standing,” but I’d like to see somebody argue against me on the merits.

Yes, Kathryn Bigelow is the first woman to win a best director Oscar. What’s even more interesting is her background, and the fact that someone whose resume includes stints with the Art & Language collective, and collaboration with Mayo Thompson of the Red Crayola, has achieved such mainstream success.

My own choices for the three most essential John McPhee books would be The Control of Nature, Coming into the Country, and The Pine Barrens, but the point is to read the man’s work, if you haven’t already done so.

The tale of the abbey and the shipwrecked king.

As much as I love Neil Young’s music, I found the Jonathan Demme music-doc Neil Young: Heart of Gold a little too stately for my taste. The second go-round between Demme and Young, The Neil Young Trunk Show, sounds like it’ll be a lot more interesting.

The worst kind of anniversary.

Too bad I don’t have cable

But, then again, that’s why God invented the DVD box set. As soon as Treme comes out in one, I’m adding it to The Awesome Nighthawk Books DVD Archive. 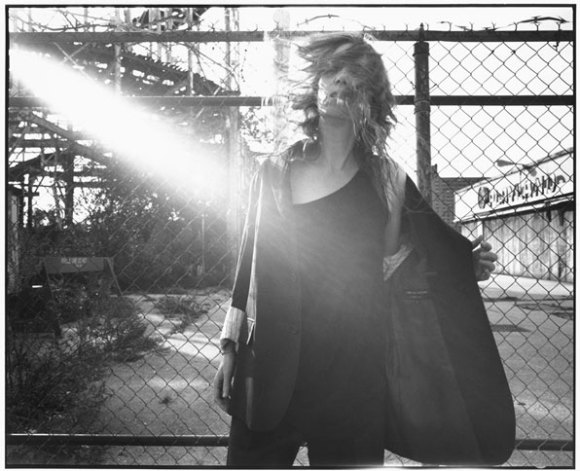 Patti Smith’s new book, Just Kids, is a great read. I’ll talk about it at greater length in a few days, but what was described to me as a memoir of her relationship with Robert Mapplethorpe turns out to be a self-portrait of Smith training herself to become an artist. Fascinating stuff. And how cool is it that Smith will be headlining a benefit show for New Brunswick’s durable Court Tavern?

Maybe the eBook isn’t the wave of the future after all.

I’ve had a nonfiction book proposal out there for quite some time. It went out just as the first round of truly serious layoffs hit the publishing industry, so that added a few months to the wait. But now the responses are coming in. The editors love the proposal. Not each and every last one of them, of course, but the majority are throwing around words like “beautiful” and “fantastic.” One editor even told my agent that I’m an amazing writer.

And yet none of these responses has generated an offer, much less a sale. The problem, according to many of the editors, is that the idea isn’t Big enough. Apparently that’s how the publishing industry sees itself going forward and shrugging off the recession — by publishing only Big books.

So what constitutes a Big book? Well, my agent just spoke with an editor who was all fired up by her new project. “I’m working on a book with Hulk Hogan,” she said.

Yeah, that’s right — Hulk Hogan. The wrestler who was famous right about the time Ronald Reagan was bringing his first jar of jellybeans into the White House. That’s gonna be her Big book.

God, I’m sick of these people. They’re like a bunch of lemmings that can’t decide which cliff to jump off.

To say I’m in geek heaven right now would be the most ridiculous kind of understatement. I’m delighted and then some. The reason is that for the first time in decades, I am listening to Bernard Herrmann’s early ’70s recording of Holst’s The Planets with the London Philharmonic Orchestra, and finding it every bit as great as I remembered.

For a lot of people, The Planets is one of moldiest figs in the orchestral barrel, but this particular recording is one of the very first classical performances that grabbed my imagination and refused to let go. It’s certainly one of the first that I bought after getting a portable cassette player for my twelfth birthday. The very first cassette I bought with my birthday swag was the soundtrack to 2001: A Space Odyssey, followed by Strauss’ Don Quixote. Having played them both to death, I went looking through the Sam Goody cassette section (which back then was still dwarfed by the vinyl LP stocks) and spotted the gray cover art of an LP that had been played by a seventh-grade  music teacher, who I knew then and now only as Mr. Paterno.

Mr. Paterno was probably getting starvation wages from the Saddle Brook school district at that time, but he took his job seriously enough to play an astonishing variety of music. I was being raised in a household where Percy Faith, Mantovani, and Sergio Mendes were the only sounds heard, aside from the occasional dash of Aaron Copland. So it was quite a thing for me to hear Black Sabbath’s “Iron Man” and “Mars, The Bringer of War” side by side as Mr. Paterno sought to illustrate some point about musical composition. Which is how I came to buy The Planets, which knocked my socks off as soon as I got it home. So let me say once again, thank you Mr. Paterno, wherever you are.

The CD recording comes from ReDiscovery, a boutique labor of love that issues CDR editions of long unavailable recordings of classical music. The CD sounds just fine for what it is, and it’s good enough to make me wish some larger entity would reissue the music in a remastered CD or SACD format. But no company has seen fit to do that, much to my annoyance over the years. It was particularly frustrating because virtually all of Herrmann’s superb film music has been reissued on CD, along with much of his own orchestral work, while my beloved recording of The Planets remained obscure.

The likeliest reason is that Herrmann’s recording was pretty roundly trashed by critics when it first appeared. The biggest complaint was that Herrmann slowed the tempos, particularly on “Mars,” which other conductors usually take at breakneck speed.  After years of relying on memory (and wondering if I hadn’t simply imprinted on the first version I’d heard, the way just-hatched ducklings take the first thing they see to be their mother), I can now confirm that Herrmann’s judgment was impeccable. No other version of The Planets comes close to matching the emotional power of Herrmann’s rendition. This is the recording to have if you want The Planets, as far as I’m concerned.