In the early 1960s, Duke Ellington found himself between recording contracts, and decided to capitalize on it by working with some of the young turks who were redefining jazz. His album with John Coltrane produced one sublime track (their beautiful version of “In a Sentimental Mood”) but was undercut by the fact that Coltrane was playing with Ellington’s regular sidemen. There was no such problem when Ellington went into the studio with Charles Mingus and Max Roach,  two iconoclasts who loved Duke’s music but were equally determined to keep him on his 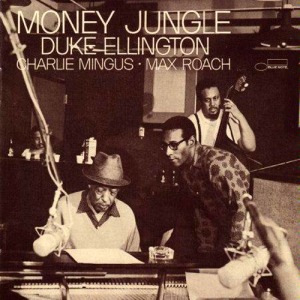 toes every minute. (That Mingus had been fired from Ellington’s orchestra, years earlier, after he got into a brawl with Juan Tizol no doubt added a whole layer of subtext.) Not all of the tension was directed at Ellington: at one point, the legendarily combative Mingus grew so angry with Roach that he packed up his bass and headed for the elevator, and only came back after Duke spent some time smoothing his feathers.

The album that resulted, Money Jungle (1962), is a tense, often combative sounding record loaded with remarkable music, but not exactly easy listening. Except, that is, for “Fleurette Africaine,” an Ellington tune that qualifies as virtually spontaneous composition. According to Duke, he prepped Mingus and Roach by describing an image of a flower standing alone in a forest. Mingus closed his eyes and came up with the fluttering bass line that opens the song, and Roach improvised subtle but emphatic accompaniment. The tune’s a wonder, and the performance is a career standout for all three musicians. It’s certainly one of my all-time favorite Ellington compositions.

The simplicity and beauty of the tune seems to attract at least as many musicians as Mingus’s “Goodbye Pork Pie Hat,” with equally mixed results. I rather like this guitar duo treatment on YouTube:

On the opposite end of the scale is this treatment by Gary Burton and Pat Metheny. Both men have their fans, but this version is way too ornate for my tastes:

This version by the amusingly named Trio De Janeiro hath charms to soothe the savage beast:

But in the end, I prefer the simpler approach, whether from Duke or any other interpreter:

Why I love the Internet

A religiously-inspired progressively-leaning magazine is starting a new series, namely asking people which book “provides support, or is a book to which one often returns.” And the answer cannot be the Bible.

She gave her own answer and invited readers to post their in the comments field. Quite a few have chimed in, and their answers are well worth a bit of your time.