Big Brother’s steady incursions into my privacy have had one beneficial effect: whenever I go to a website with those ads for the zZounds music store, I get bombarded with images of Les Paul-style electric guitars, both of the Epiphone and Gibson varieties. That’s because, for me, guitar ads are the same thing as Page Six girls, and I can’t resist looking even though I can’t afford any of them.

What’s impressive to me is that whatever programming thingy is used on the ads remembers my predilections so thoroughly: the images are always those great, womanly-shaped Les Paul models, even the lower-priced numbers Ibanez puts out. (Look at this Artist model and tell me you don’t want to give it a try.) Only once did I accidentally click on a Fender model, which meant Strats and Teles were sown through the Les Pauls for a while, but now they’re pretty much gone. I can’t deny the appeal of a Stratocaster, but Big Brother knows what makes my heart go pitter-pat.

I had no idea that Gibson had issued a Steve Jones model Les Paul in honor of the Sex Pistols ax-man. Though it was discontinued some time ago, it appears to have been a sturdy mid-Seventies type Les Paul without a whole lot of gewgaws, aside from the Varga Girl decals on the bottom.

As for the sound, here’s a clip in which Steve Jones himself demonstrates some of those big nasty riffs off Never Mind the Bollocks, Here’s the Sex Pistols.

I read about the punks before I heard them: the early coverage in Rolling Stone pretty much went along with the “Sex Pistols can’t play their instruments” conventional wisdom. It took a network TV program of all things to set me straight. The NBC series Weekend with Lloyd Dobyns did a segment on punk rock that showed Johnny Rotten recording the vocal track for “God Save the Queen,” and I realized that (a) the Sex Pistols were anything but incompetent, and (b) they played rock and roll the way I’d always wanted it played. Then I heard the “God Save the Queen” single, purchased at Armand’s Sound Odyssey in the Cherry Hill Mall, and learned that Steve Jones was in fact an unsung monster on the electric guitar.

It’s interesting to hear the riffs stand by themselves, without the multiple overdubs that made Never Mind the Bollocks into a veritable maelstrom of guitar. (The original versions quickly became available on a semi-official bootleg called Spunk, which is worth tracking down.) Clinton Heylin has called the album’s sound “guitar soup,” but I think it’s extraordinary: a universe of snarling riffs, pounded home by Paul Cook’s exemplary drumming.

As for the Steve Jones guitar, let a hardcore fan demonstrate how it sounds:

Pete Townshend’s career as the avatar of guitar destruction began by accident — during a Who gig in 1964, he broke the headstock of his Rickenbacker on the low 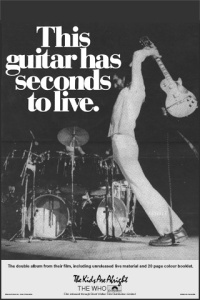 ceiling and smashed the rest of the instrument in frustration — but once it began he pursued it diligently enough to warrant a Web page devoted solely to his ex-axes. As someone who loves guitars for their sheer beauty as well as their musical qualities, I deplore any such demolition, but it’s particularly painful to see havoc being wrought on a gorgeous Gibson Les Paul Custom, the instrument being maltreated in this poster for the Who movie, The Kids Are Alright. I mean, look at this thing. Why on earth would anybody want to smash something like that? Even if it would make for a great climax on “Won’t Get Fooled Again”?

I suppose the purist attitude would be one of offense that something meant to be used and mastered — to be played — is being treated as a fashion and lifestyle accessory, but there’s no denying that a well-made guitar is a thing of beauty in its own right.

I’ve always thought that the tabulatures in guitar magazines serve the same purpose that quality fiction used to serve in Playboy and Penthouse — giving readers a way to pretend they’re interested in something more uplifting than just staring at beautiful pictures of curvy lust objects. So here at last is a magazine that dispenses with the tabs (or the John Updike stories) and amps up the photos of objects of desire.

Les Paul, master musician and inventor, died today at 94. If that much-abused word “legend” could be applied to anyone, it would be Les Paul.

As a legend, he was remarkably accessible. For years you could see him doing a regular Monday night gig at Iridium in New York, often with superstar guests sitting in. If you never got to see Les Paul in action, it wasn’t for lack of opportunity.

I realize that Leo Fender has his towering place in the history of the electric guitar, but to me those Les Paul designs will always be the first image that comes into my head whenever I hear the words “electric guitar.”

Maybe it’s the half-dozen margaritas I consumed this evening, but for me this passage is bursting with poetry.  If Ted Hughes, Seamus Heaney, Paul Muldoon and W.S. Merwin got together to write a poem, they could hardly come up with something so filled with beauty and potential that it strains the skin of the air touching my eardrums:

The Bigsby vibrato added to Neil Young’s Les Paul (also occasionally available as a factory extra on a Les Paul) makes a very real contribution to his tone. Used to give lead lines anything from a jagged, angular irregularity to a bouncing, wobbly vibe, Young’s Bigsby also functions as a trigger into feedback, and is used to bend decaying notes to nail down the howl zone.

Of course, truly effective use of feedback is enabled by the right amp and the right amp settings. The first part of the equation is achieved by a surprisingly simple, petite piece of gear: a late-1950s tweed Fender Deluxe. This little beastie, with just two volume controls and a single, shared tone control, puts out a mere 15 watts from two 6V6GT output tubes, and carries just a single 12” speaker, but has powered Neil Young’s rock sound in stadiums and arenas around the world since he acquired it in 1967 (although the sound is fed through other, larger amps and its own monitoring system in order to be heard on large stages). A raw, hot little amp, the tweed Deluxe breaks up early, with a lot of tube-induced compression at most volume levels. Up past around 11 o’clock on the dial these amps really don’t get much louder, they just saturate more, issuing increasing levels of distortion tone. (Young’s Deluxe is reported as being rebiased to use larger 6L6 output tubes; the change wouldn’t increase its volume all that much, but would most likely fatten up the lows some and give the sound more body.)

The Deluxe’s hot, hotter, and hottest gain structure brings us to the second part of Young’s lead/feedback tone equation: the settings. In order to access the Deluxe’s varying degrees of overdrive, Young uses a custom-made amp-control switching device known simply as “the Whizzer.” Consisting of two parts, the foot controller and the mechanical automated switching device that physically turns the amps knobs, the Whizzer allows Young to stomp a footswitch on the floor to command the unit to twist the Deluxe’s volume and tone controls to any of a number of carefully determined preset positions. As such, and rather incredibly—if you’re familiar with the Neil Young overdrive sound—he uses no booster, overdrive, or distortion pedals to achieve his unhinged tone; just the little 50-year-old tweed Deluxe, and the Whizzer.

It may help you to understand if I explain that one of the happiest moments of my life was holding an Epiphone Les Paul Standard in my hands and knowing it was mine to take home. Years of cruising pawn shops had finally paid off, and after a setup at a reputable guitar shop, I had a beautiful ebony electric to take home and keep alongside my Epiphone Dot. I love it dearly.

My pledge to you, good people, is that if I ever score a serious book deal, one of my first acts will be to order a genuine Gibson Les Paul with a Bigsby tailpiece. I will make ungodly noises with it at inappropriate times of the day and night, and I will be glad to do so in honor of anyone who clicks on my Web site.

I’ve never been a particularly big fan of Pink Floyd, but I’ve always found one or two songs per album to like. In the case of “Comfortably Numb,” the key track from The Wall, that translates into “really, obsessively like,” with much of the credit going to guitarist David Gilmour and his two solos: the initial, shorter one, and the barnstorming epic that closes the song. Each opens with that deep, soulful bend that’s enough to make a Strat Cat out of anyone. This clip from the 1989 performance in Venice doesn’t feature the fabled Black Strat, but Gilmour makes do with a red one just fine. 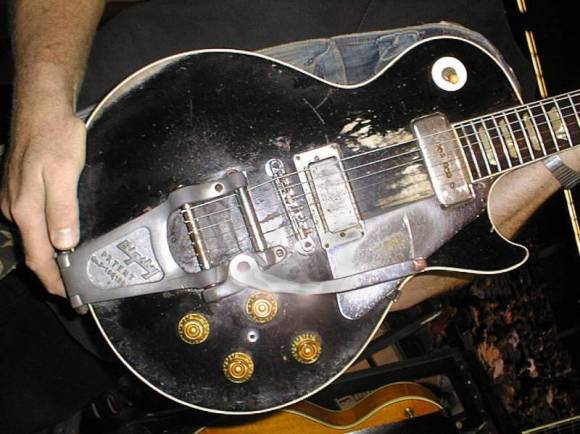 B.B. King has Lucille, Eddie Van Halen has the Frankenstrat, Jerry Garcia had Tiger, Willie Nelson has Trigger, and Neil Young has Old Black, the heavily modified Gibson Les Paul that has been the cornerstone of the man’s electric sound since the Sixties.

On the DVD that comes with the deluxe edition of Neil Young’s Fork in the Road, there’s a clip of Neil and band playing “A Day in the Life.” Collectors and hardcore fans will be happy to have the clip, but for me the chief point of interest was getting a close look at Old Black during the song’s apocalyptic finale, when Young literally breaks all the strings and swishes the ends across one of the pickups. When the camera comes in close, you can see just how many battles that ax has fought over the years.

This very detailed description of a custom-made Old Black replica guitar includes loving closeups of the guitar’s Bigsby vibrato bar (which Neil uses to alter the pitch on his trademarked feedback howls) and the distinctive aluminum pick guard, which adds to the guitar’s already massive feedback potential.