Hold on to your hats, everyone. I just read An Atheist in the FOXhole: A Liberal’s Eight-Year Odyssey Inside the Heart of the Right-Wing Media and I’m ready to share some of author Joe Muto’s discoveries during his years at Fox News and his stint as the undercover observer for Gawker.  Fix yourself a good strong drink and take up a position near the fainting couch, lest these smokin’ hot revelations send you toppling in disbelief.

FOX NEWS IS CONSERVATIVE! BILL O’REILLY IS A PRIMA DONNA WITH AN EXPLOSIVE TEMPER! GLENN BECK IS SUCH A KOOK EVEN FOX NEWS WORRIED ABOUT LOSING CREDIBILITY! SARAH PALIN IS A SELF-AGGRANDIZING NITWIT!

Oh, and Geraldo Rivera waits politely to use the vending machines and has a gorgeous wife. 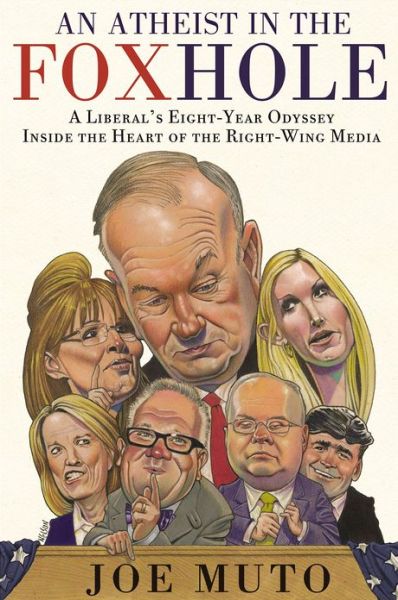 information on the personal life of Joe Muto, his breakups, his attempts to have a personal life, and his ongoing effort to convince himself that paying New York rents makes sense. It also has a running subplot showing how Muto, hired by Gawker to be a mole in the Fox News ranks — much the way the late, lamented Spy magazine had moles burrowing through the New York Times and the Wall Street Journal — bobbed and weaved to avoid being outed by the Fox management. As a means of generating  suspense, it falls considerably short of The Big Clock.

Muto spent the best years of his Fox period working under Bill O’Reilly, and while his depictions of the volatile top dog at Fox ring true, that’s because he isn’t offering much that we haven’t seen before. Though politically liberal, Muto ended up liking Bill-O even when he was living in dread of pitching the wrong story idea. It’s not hard to see why. One of the few roosters in the Fox News barnyard with a genuine news background, O’Reilly shows just enough independence along with his crankery to be an interesting figure. The first time I saw O’Reilly’s show, in which he interviewed an evangelical about his group’s stance on allowing gay couples to adopt children, I thought O’Reilly was pretty good. The Jesus whooper kept saying the group’s stance on gay adoption was in line with Blblical teachings; knowing he would come off barbaric and creepy, the whooper refused O’Reilly’s repeated challenges to articulate those teachings, and the ensuing game of rhetorical Whack-a-Mole was pretty entertaining. There’s no point in overpraising the man — his nonsense about secular progressives and the phantom war on Christmas is straight out of Bedlam. But in a shop dominated by GOP apparatchiks, ideological grifters, and race-baiting clowns, O’Reilly does stand out.

Fora man who spent so much time in the Fox trenches, Muto has remarkably little to say about Sean Hannity, Glenn Beck or Ann Coulter, all of whom are presented on the book jacket in what can only be described as consumer fraud. Ann Coulter, a nasty creep on camera, is very pleasant and warm offstage — wow, what an insight. Glenn Beck, for all his business savvy, seems like a true loon — hey, thanks for the analysis, dude. Muto’s prose style is competent without being particularly memorable: there are a couple of zingers, but not nearly enough to justify this forced march over too many barren pages. An Atheist in the FOXhole is a true disappointment: a book that promises much, delivers little, satisfies not at all.

If Bill O’Reilly ever goes back to Iceland, I suggest that instead of crow, he be given some nice dish of hakarl to eat. Just saying.