‘Does anybody know where we keep the self-destruct manual?’

I realize this is not the most earth-shaking cultural news at the moment, but over the weekend I watched the super-duper electric boogaloo DVD edition of the 1979 film Alien, and found that after three decades my opinion of it is unchanged: first half brilliant, thanks to the superbly creepy 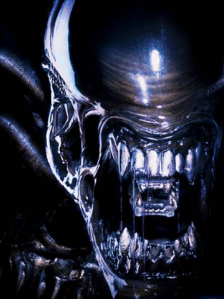 design work of Swiss artist H.R. Giger and the low-key acting that keeps everything grounded in believability; second half idiotic, thanks to the decision of scriptwriter Dan O’Bannon and director Ridley Scott to abandon the brainy atmosphere and turn the spaceship into an amusement park haunted-house ride. I also concluded, after watching the recut version with the famous “Kill me!” scene restored, that Scott had been correct to remove it from the original theatrical release. Maybe it could have been used more artfully, earlier in the narrative, but during the climax it simply slows things up.

The trouble with potentially great movies that go bad is that they leave you thinking about pointless things, such as: Why design a spacegoing freighter with a self-destruct mechanism? At any given moment, the world’s oceans are being criss-crossed by carrier ships loaded with immensely valuable cargo, but they aren’t equipped with jumbo warheads that will blow them sky-high after a few minutes of notice. So why equip an ore carrier with a portable Armageddon machine? And why put the control panel a great distance from the escape ship? And why line the escape route with strobe lights, steam jets, blind corners and other funhouse paraphernalia that will only increase the likelihood that the crew members blow up along with the ship?

On the other hand, the director’s cut of the first sequel, Aliens, improves on an already exemplary action film. Not that anybody really needs to know this, but . . . you know . . . I just thought I’d share the joy.