You can leave your Hatter on 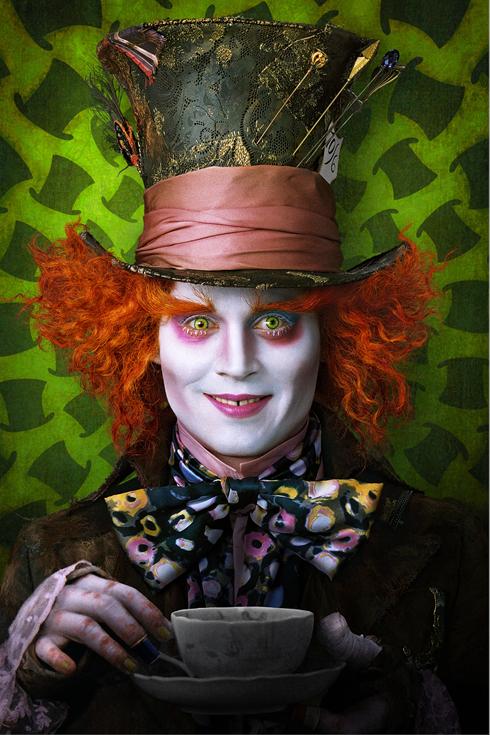 Tim Burton’s adaptation of Alice in Wonderland, due out in March, should be a visual feast, if nothing else. That said, I don’t much like this image of Johnny Depp as the Mad Hatter, which brings to mind a background player in the Cirque du Soleil, or the result of some genetic experiment involving the DNA of Bozo the Clown and Quentin Crisp. It’s fine that Burton is amping up the menace that always coiled beneath the surface of the book, but the Mad Hatter is one of the dark stars of the Lewis Carroll universe, and I’m afraid this concept doesn’t do him justice.

To me, the most perfectly monstrous realization of the Mad Hatter is in the 1985 film Dreamchild, based on Dennis Potter’s script about the

relationship between Rev. Charles Dodgson, who would become known to the world as Lewis Carroll, and Alice Lidell, whom the world remembers as the Alice who inspired Alice’s Adventures in Wonderland and Through the Looking Glass. Potter’s story uses the older Alice’s visit to the United States in 1932 as the springboard for a blend of fantasy and fact, in which the aged woman’s memories of Dodgson and his characters are tainted by the suspicion that Dodgson’s love for her was pedophile. There are several memorable sequences involving the Wonderland characters (realized by Jim Henson’s Creature Shop) only now the critters created for a young girl’s

delight have become vulpine and threatening — embodiments of the older woman’s darkest fears. The scariest of the bunch is the Mad Hatter, crafted to resemble someone afflicted with mercury poisoning. Many readers assume the behavior of Lewis Carroll’s Hatter reflects the fact that mercury poisoning was an occupational hazard for hat-makers in the Victorian era — hot mercuric nitrate was the key to shaping animal pelts into felt, and workmen couldn’t help inhaling the toxic fumes — but the Hatter as described by Carroll (and drawn by John Tenniel) exhibits none of the classic symptoms. It’s pretty well accepted that Carroll’s creation was based on Theophilus Carter, a furniture dealer and inventor who lived near Oxford and was known to locals as the mad hatter for his eccentric behavior and favorite headgear. Still, the Henson version of the Hatter is the only one that can stand alongside the Tenniel original for boldness and artistic daring.

I recently watched an old VHS copy of Dreamchild and it’s still a wonderful film: the closing scenes, in which the elderly Alice comes to terms with the past and realizes the depth of Dodgson’s love for her, is guaranteed to put a lump in your throat. For reasons I’m still not clear on, Dreamchild was destined for oblivion — apparently the production studio collapsed, leaving several orphaned properties of which Dreamchild was one — when it caught the attention of  New Yorker critic Pauline Kael, whose praise led to a  limited theatrical release at the Public Theater, which is where I first saw it. Here’s hoping the hoopla around Burton’s vision of Wonderland leads some enterprising firm to issue a proper DVD and Blu-Ray edition of Dreamchild, a film that deserves to be far better known.