Tag Archives: Her Eyes Are a Blue Million Miles 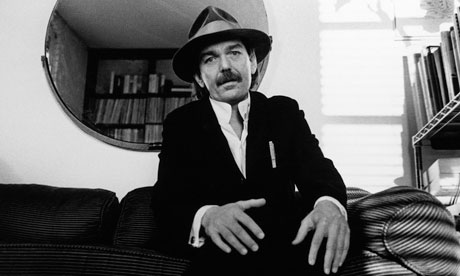 Beefheart, aka Don Van Vliet, just died of complications from multiple sclerosis, and it’s been great to see the range of tributes he inspired. As “obscure” artists go, he will prove to be a very influential one. He was already a role model for Tom Waits in his mid-Eighties transformation, and most of the ambitious post-punk bands owe him at least a name check.

Beefheart’s most challenging music sounded like free jazz, but he notoriously flogged his players into performing his music note-for-note, with no room for improvisation. Even his more straightforward blues rockers contained baffling, surrealistic lyrics that might have been transcribed directly from his id — or broadcast from another planet entirely.  More than one acquaintance described him as a visual artist trying to express his ideas through music, so when Beefheart retired from recording in the Eighties in order to concentrate on his painting, it seemed like the most natural of transitions.

Beefheart was a childhood friend of Frank Zappa, who gave him his monicker, released some of his albums, and used him on some famous tracks, such as “Willie the Pimp” off Hot Rats. Zappa was far and away the better known of the pair, but I don’t think there can be any doubt that Beefheart was the more adventurous and ambitious artist. He had none of Zappa’s instrumental prowess, but it’s impossible to imagine Zappa recording anything as nakedly emotional as “Her Eyes Are a Blue Million Miles,” or as poetic as “Orange Claw Hammer,” in which an old sailor encounters his daughter after decades at sea:

Many of the Beefheart tributes cite Trout Mask Replica as his masterpiece, but I beg to differ. Personally, I find the album all but unlistenable these days. Doc at the Radar Station is a far better and more accessible sample of Beefheart at his most extreme, while Clear Spot and The Spotlight Kid (conveniently available on a single CD) showcase his blue-eyed soul side at its most appealing. They’re still plenty weird, in an approachable way — I wish the Lowell George-era Little Feat had covered “Nowadays a Woman’s Gotta Hit a Man.” Or you could try his debut album, Safe as Milk, in which the bluesman and the garage-rocker exist in perfect, jangling harmony.

Top 14 Reasons Why Captain Beefheart Was a True American Genius.