This notion of linking up filmmakers with books that would benefit from being adapted into film hasn’t produced the kind of response I’d hoped for, but I post on anyway. The first four are here, and now on to the fifth.

Dying Inside, published in 1972, was the culmination of Robert Silverberg’s drive to lift himself from a fast-working genre hack to a thoughtful writer who consistently stretched the boundaries of literary science fiction. His 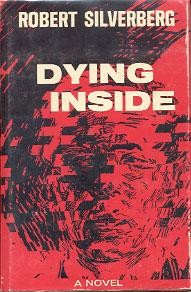 work from the late Sixties, beginning with Thorns, already stood head and shoulders above that of his colleagues, but Dying Inside was the perfect merger of a well-established science fiction theme — telepathy — with the kind of prose treatment found in top-notch literary fiction. SF abounds in stories of persecuted people with hidden powers who ascend to something like godhood; Silverberg stood the idea on its head by making his protagonist, David Selig, a man born with extraordinary powers, who must now cope with their loss as he ages. What makes the book engrossing rather than depressing is Silverberg’s skill at showing how the ability to read minds has warped Selig’s life: it has ruined two love affairs, spoiled his relationship with his younger sister, given the people around him a creepy sense of being under surveillance, and burdened Selig with a sense of himself as a grubby eavesdropper into the lives of others. The loss of this double-edged gift is paradoxically uplifting; unable to use his super power in any positive way, Selig now has the chance to become fully human through its loss.

Silverberg tells the story in fragmentary fashion, shifting from the first-person to omniscient third-person in response to the level of pain and embarrassment Selig feels as he looks back on his life. Not all of the memories are unpleasant: there’s a bravura sequence in which the teenaged Selig wanders a farm, idly slipping into the minds of the creatures around him, jumping from a trout swimming past to a pair of lovers in the throes of passion. At least one memory is downright thrilling:

One summer when I was eight or nine — it was before they adopted Judith, anyway — I went with my parents to a resort in the Catskills for a few weeks. There was a day camp for the kiddies, in which we received instruction in swimming, tennis, softball, arts & crafts, and other activities, thus leaving the older folks free for gin rummy and creative drinking. One afternoon the daycamp staged some boxing matches. I had never worn boxing gloves, and in the free-for-alls of boyhood I had found myself to be an incompetent fighter, so I was unenthusiastic. I watched the first five matches in much dismay. All that hitting! All those bloody noses!

Then it was my turn. My opponent was a boy named Jimmy, a few months younger than but taller and heavier and much more athletic. I think the counselors matched us deliberately, hoping Jimmy would kill me; I was not their favorite child. I started to shake even before they put the gloves on me. “Round One!” called a counselor, and we approached each other. I distinctly heard Jimmy thinking about hitting me on the chin, and as his glove came toward my face I ducked and hit him in the belly. That made him furious. He proposed now to clobber me on the back of my head, but I saw that coming too and stepped aside and hit him on the neck close to his adam’s-apple. He gagged and turned away, half in tears. After a moment he returned to the attack, but I continued to anticipate his moves and he never touched me. For the first time in my life I felt touch, competent, aggressive. As I battered him I looked past the improvised ring and saw my father flushed with pride, and Jimmy’s father next to him looking angry and perplexed. End of round one. I was sweaty, bouncy, grinning.

Round two: Jimmy came forth determined to knock me to pieces. Swinging wildly, frantically, still going for my head. I kept my head where he couldn’t reach it and danced around to his side and hit him in the belly again, very hard, and when he folded I hit him on the nose and he fell down, crying. The counselor in charge very quickly counted to ten and raised my hand. “Hey, Joe Louis!” my father yelled. “Hey, Willie Pep!” The counselor suggested I go over to Jimmy and help him up and shake his hand. As he got to his feet I very clearly detected him deciding to butt me in the teeth with his head, and I pretended to be paying no attention, except when he charged I stepped coolly to one side and banged my fists down on his lowered back. That shattered him. “David cheats!” he moaned. “David cheats!”

How they all hated me for my cleverness! What they interpreted as my cleverness, that is. My sly knack of always guessing what was going to happen. Well, that wouldn’t be a problem now. They’d all love me. Loving me, they’d beat me to a pulp.

Like Silverberg, Peter Jackson made his own craftsman’s journey upward,

from splatter movies to the Oscar-winning Lord of the Rings films and the upcoming prestige release The Lovely Bones, which is also being touted as Oscar bait. The artistic transition from Bad Taste to The Lord of the Rings is as dazzling as Silverberg’s leap from Invaders From Earth to Son of Man. Jackson also has an unabashedly broad appetite for fantasy and science fiction, as well as en eye for talent: in Heavenly Creatures, for example, he gave Kate Winslet her first major showcase.

The glimpses I’ve seen of footage from The Lovely Bones make me think Jackson would be the one to find an ingenious and original way of visualizing Selig’s telepathic experiences. Just as importantly — perhaps more so — Jackson knows how to imbue fantasy material with well-grounded, earthly emotions. My two favorite sequences from The Two Towers — Elrond’s warning of what awaits Arwen if she stays behind, and Theoden’s recitation of “Where is the horse, where is the rider?” — have little to do with special effects and everything to do with the power of the human voice, and the savvy of a director who knows when it’s time to hang back and simply let the actors carry their scenes. To see that kind of artistry at work on adapting what is arguably the finest SF novel of the Seventies would be a rare treat.