LET ME IN/LET THE RIGHT ONE IN by John Ajvide Lindqvist, Thomas Dunne Books, 2007.

If Patricia Highsmith had set out to write a straight-up, balls-to-the-wall horror novel, the result probably would have been a lot like Let Me In, Swedish author John Ajvide Lindqvist’s 2004 debut: 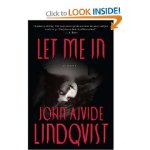 Hakan had found a good place to stand watch, a place with a clear view of the path in both directions. Further in among the trees he had found a protected hollow with a tree in the middle and there he had left the bag of equipment. He had slipped the little halothane gas canister into a holster under his coat.

Now all he had to do was wait.

Once I also wanted to grow up

No respect for beauty — that was characteristic of today’s society. The work of the great masters were at most employed as ironic references, or in advertising. Michelangelo’s “The Creation of Adam,” where you see a pair of jeans in place of the spark.

The whole point of the picture, at least as he saw it, was that these two monumental bodies each came to an end in two index fingers that almost, but not quite touched. There was a space between them a millimeter or so wide. And in this space: life. The sculptural enormity and richness of detail of this picture was simply a frame, a backdrop, to emphasize the crucial void in its center. The point of emptiness that contained everything.

And in its place, someone had superimposed a pair of jeans.

Someone was coming up the path. He crouched down with the sound of his heart beating in his ears.No. An older man with a dog. Two wrongs from the outset. First a dog he would have to silence, then poor quality.

A lot of screams for so little wool, said the man who sheared the pig.

He looked at his watch. In less than two hours it would be dark. If no one suitable came aling in the next hour he would have to settle for whatever was available. Had to be back home before it got dark.

The man said something. Had he seen him? No, he was talking to the dog.

“Does that feel better, sweetpea? You really had to go, didn’t you. When we get home daddy will give you some liverwurst. A nice thick slice of liverwurst for daddy’s good little girl.”

The halothane container pressed against Hakan’s chest as he leaned his head into his hands and sighed. Poor bastard. All these pathetic lonely people in a world without beauty.

He shovered. The wind had grown cold over the course of the afternoon, and he wondered if he should take out the rain jacket he had stowed away in his bag as protection against the wind. It would restorct his movement and make him clumsy where he needed to be quick. And it could heighten peoples’ suspicions.

Two young women in their twenties walked by. No, he couldn’t handle two. He caught fragments of their conversation.

A girlfriend who was pregnant. A young man who wasn’t going to take responsibility. that’s how it was. Happened all the time. No one thought of anything but themselves. My happiness, my future was the only thing you heard. Real love was to offer your life at the feet of another, and that’s what people today are incapable of.

The cold was eating its way into his limbs; he was going to b clumsy now, raincoat or no raincoat. He out his hand inside his coat and pressed the trigger on the canister. A hissing noise. It was working. He let go of the trigger.

He jumped in place and slapped his arms to get warm. please let someone come. Someone who was alone. He looked at his watch. Half an hour to go. Let someone come. For life’s sake, for love.

That last line is more than just an example of a predatory delusional system at work: Let Me In is, among other things, a book about love and devotion, as well as the bonds forged among outcasts and damaged people. That emotional authority gives weight to the story, as does Lindqvist’s disciplined approach. There is only one supernatural element in Let Me In, and the story’s horrors are all the more effective for the way Lindqvist sets them against the gray walls of a particularly depressing city housing complex outside Stockholm.

The recent film adaptation of Lindqvist’s novel, retitled Let the Right One In, was a sensation on this year’s festival circuit and received a brief theatrical run preparatory to a DVD release early next year. I’ll certainly want to see the film, but you shouldn’t miss reading the book first if you want to discover one of the most original horror novels to come along in years. You should certainly avoid reading any of the publicity, because as the passage above shows, Lindqvist very expertly raises certain expectations, then gleefully yanks the rug out from under those expectations. I haven’t been this impressed by a horror writer since I read Clive Barker back in the Eighties, but Lindqvist’s approach is much less flashy — and, in its subdued way, far more effective.

Tagged horror novels, Let Me In, Let the Right One In, Lindqvist, Sweden