Le Freak: An Upside Down Story of Family, Disco, and Destiny is a more interesting music-biz memoir than most because Nile Rodgers is a more interesting music-biz figure than most. Partly it’s his singular background: born to a barely teenaged mother, raised in a multiracial bohemian clan dominated by music lovers and drug addicts, befriended by musicians and, for a time, a professional killer enamored of his mother. Partly it’s his wide focus: coming of age in the 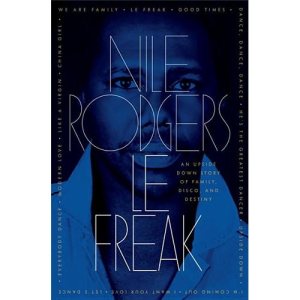 Sixties, Rodgers went from hippie to clubber and co-founded the influential disco group Chic before going on to produce albums for Diana Ross, David Bowie, Madonna, Duran Duran, and the B-52’s. But mostly it’s because Le Freak, even when it falls into the “I did this, and then I did that, and then I did this other” quality that’s inevitable in autobiography, is primarily about the entanglement of art and life, and the great things made possible by that entanglement.

Let me state for the record that I hated every metronomic, high-hat swishing, migraine inducing, lyrically vapid, assembly-line moment of the disco era, but even at its nadir — when the umpteenth repetition of the Bee Gees on the radio had me contemplating mass murder, for instance — I had to acknowledge Chic had something more on the ball. On the Chic classic “Good Times,” the interplay between Tony Thompson’s drums, Rodgers’ guitar, and Bernard Edwards’ bass carried a lightness and bounce at odds with the steam-press bomp bomp bomp of standard-issue disco. I got my first indication of Nile Rodgers’ surprising mind when he described the way Chic’s deliberately low-key stage identity — though he and bassist Bernard Edwards led the group, they could hardly be called frontmen — was influenced by his fondness for “faceless” groups like Kiss and Roxy Music. He’s also on the money when he points out that disco posed a dance-music challenge that had to be answered in the post-punk era by Talking Heads, Gang of Four, and The B-52’s

According to Rodgers, Chic never got proper credit for its musicianship, and he’s probably right.

Only a handful of bassists on earth could play the bass line I wrote for the song, but a few years had passed since the night Nard and I had met in the Bronx, and by now I knew what he was capable of. The jazz-influenced song was really complicated: It had a mixture of harmonically extended chords, and the latter half of the progression incorporated two strict chromatic movements in the bass. I compensated by writing an insanely simple hook: “Everybody dance, do-do-do, clap your hands, clap your hands.” I sang it to Bernard, and he liked it, but asked me, with great earnestness, “Uh, my man, what the fuck does ‘do-do-do’ mean?” I responded with equal seriousness, “It means the same thing as ‘la-la-la’ motherfucker!” I’ve never laughed as much in my life as I did with Bernard.

Rodgers isn’t kidding about that bass line. Bernard Edwards sounds like he’s playing with four hands instead of the customary two. As for the song’s other technical qualities, have a listen:

Chic cemented its place in pop history with the 1979 single “Good Times” and The Bass Line That Could Not Be Denied.

Rodgers has said elsewhere that the lyrics included lines inspired by Depression-era ballads as a subtle commentary on the late-Seventies economic malaise. He doesn’t include that story here, but he does recount what happened when the “Good Times” bass line was swiped by the Sugarhill Gang for “Rapper’s Delight,”and the Chic organization demanded acknowledgement and compensation. Rodgers and Edwards found themselves up against mobbed-up music mogul Morris Levy, who had been ripping off musicians black and white for decades.

The book preserves the oft-told story of how Rodgers and Bernard Edwards, refused admittance to Studio 54, slogged back to a friend’s apartment and worked off their anger by playing a riff that developed into “Le Freak,” one of Chic’s biggest singles:

We downed a few bottles of vintage Dom Perignon, and a little coke, which I’d started snorting while touring on the road. I picked up my guitar, started jamming on a guitar riff and singing the words that the stage doorman had said to us earlier, “Fuck off,” and Nard added “Fuck Studio 54 — aw, fuck off.” He grabbed his bass and we played this over and over, grooving and laughing. We developed the groove and even wrote a bridge, then came the chorus again: “Awww, fuck off — fuck Studio 54 — fuck off.”

“You know, this shit is happening!” Bernard said, while pulling his sunglasses down his nose in order to achieve genuine eye contact with me. He did this whenever he was serious, because almost everything was a joke to us.

“We can’t get this song on the radio. ‘Fuck off’ is pretty hard-core for the Top Forty,” I said, laughing. But Bernard was serious. He had a great ear for hooks, and realizing that this little riff and chant sounded good, we changed “fuck” to “freak.” “Awww, freak off,” we sang energetically. It was horrible, but we tried to make it work.

“Hey man, this is not lifting my skirt,” I said to Bernard.

“Yeah, I know what you’re saying,” he responded.

Suddenly the proverbial lightbulb went off. “Hey man, we should say, ‘Awww, freak out.'”

“Yeah, like when you have a bad trip, you freak out.”

That wasn’t the best reference for Bernard, since he was the last person who’d take LSD. So I quickly added, “Like . . . when you’re out on the dance floor losing it, you know you’re freaking out.”

“Yeah, plus they have that new dance called ‘the freak.’ That could be the DHM,” he said, referring to our flare for Deep Hidden Meaning, now a must for the Chic song formula.

“Yeah!” he added, his voice rising with excitement. “It would be our version of ‘Come on baby, let’s do the Twist.'”

Bernard was really into it, and we were in sync. After playing and singing for a while, Bernard made it completely ours by adding, “Le freak, c’est chic” in place of “fuck Studio 54.” Maybe the reason why this song came to us so quickly was because we were composing the songs for our next album, which was basically finished until we cam up with this off-the-cuff ditty. Chic released “Le Freak” in the summer of ’78. It featured Luther Vandross along with our signature double-female-lead-vocal sound, this time performed by Alfa Anderson and Robin Clark. It was a worldwide hit, and we got our first seven-figure check for the label’s only triple-platinum single (six million in those days). The Zen of it was, by not getting what we wanted, we got more than we ever imagined.

For those not familiar with the song:

I could easily quote miles of text from this very quotable book, but I’ll leave you to discover for yourself how the Rodgers team, hired to produce Diana Ross, was left staring into the abyss when Berry Gordy hated the result — an album that when it was finally released after much tsuris with Motown became a smash hit and revitalized her career. Or how Rodgers watched David Bowie’s creative process. Or how a true professional handles himself when Madonna turns to him in the recording studio and says, “Hey, Nile, why haven’t you tried to fuck me?” Nile Rodgers’ life left him well equipped to face such challenges, which is why Le Freak is such an absorbing memoir.